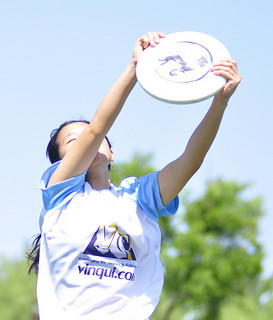 Carrie O’Brien from Naas, Co. Kildare has been selected to compete at the 2015 BULA and WFDF World Championships of Beach Ultimate (#WCBU2015) as a member of the Currier Island international team in Dubai this March. The international sporting event brings together more than 1,000 athletes from 25 countries to the beach for six days of competition. Locally, Carrie plays with Rebel and UCC Ultimate in Cork. As part of her efforts to get to Dubai, Carrie decided to fundraise for Headstrong, a mental health organisation and Nichola Kennedy FAOI Optometrist, Kilcullen is sponsoring Carrie’s sports kit. The championships are organised by BULA, a beach sports and lifestyle organization, and United Arabian Ultimate, the national flying disc association of the United Arab Emirates. The event is sanctioned by the World Flying Disc Federation (WFDF), the international governing body of all flying disc sports. “We’re looking forward to welcoming players from around the world in Dubai”, said Patrick van der Valk, BULA President. “To be selected to play amongst the world’s finest, and compete for gold in a self-refereed and exciting sport, is a thrill and a joy we all share”. Participation in Ultimate Frisbee is growing worldwide. There are more than 56 member countries in the WFDF and there are active teams in more than 80 countries. In 2013 the International Olympic Committee granted provisional recognition to the WFDF, the first step towards having Ultimate included in the Olympic Games.
For more information: wcbu2015.org· beachultimate.org· wfdf.org headstrong.ie

Wishing Carrie the very best of luck in Dubai!!